I remember waking up the next day still giddy from what happened the night before. Last Sunday, February 8th, My Warren asked me to be his wife. <3 I have imagined it soooo many times in the past, but it still didn’t measure up to the feeling I had when it finally happened.

I thought he was on his way to New Jersey, and I had to accompany Joana to see a couple of friends. I was so tired that night, that I just wanted to stay home and watch The Walking Dead. Joan convinced me to still go, bribing me with Yakisoba that her friend brought, and that we won’t stay that long. In my usual jeans, shirt and bundles for the cold, off we went to Brooklyn to her friend’s apartment.

Climbing four flights of stairs (and I must say that they were really steep stairs), I was trying to catch my breath when Joana opened the door to a dark room. I catched a glimpse of candles, petals on the floor, and a familiar face of one of our friends smiling at me. It hit me. This was it.

I think it was at that point when I panicked. I didn’t want to get inside the apartment. I stayed outside and even took a couple of steps back. It took me about a minute to go inside and saw everything again. In the dark, good friends were lined up, each holding a rose. I even saw my two best friends on a laptop and phone via Facetime! Then it just went blurred. I was so kilig and happy and crying and dyahe (shy) all at the same time, I remember just laughing like a goof as I took each step, being greeted by hugs, kisses and flowers. I think laughing has helped me hold back the tears, so I just kept on doing it. 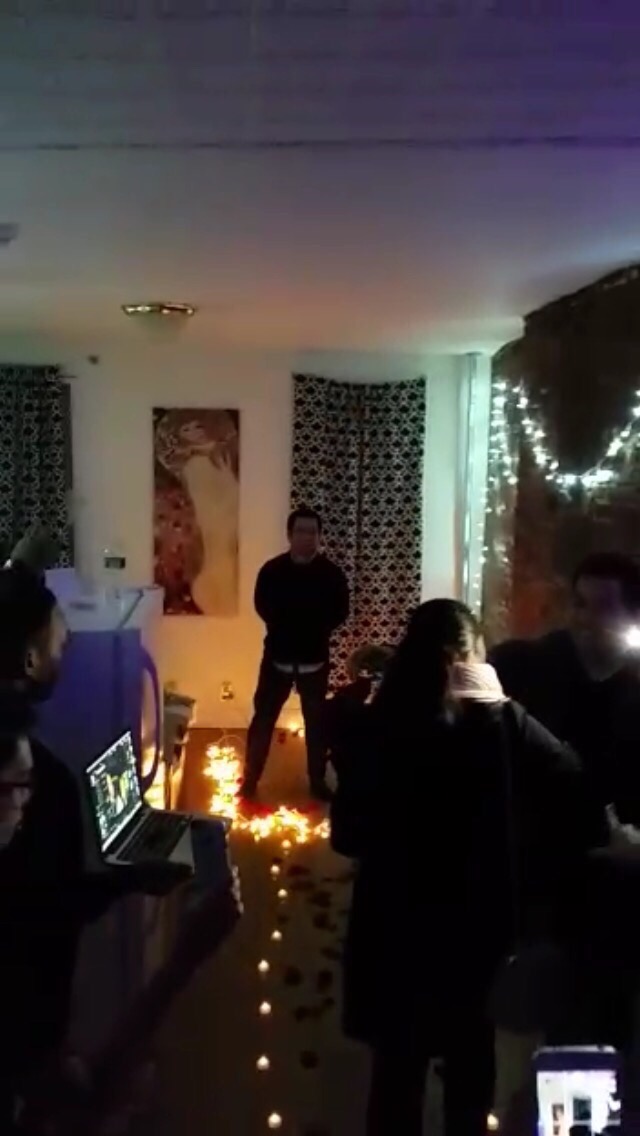 It’s blurred and dark, but that’s me hugging my cousin Joseph, who took videos and photos that night. 🙂 At the end of the line was Warren, waiting for me.

At the end of the line was Warren, saying “HI.” I think he was also nervous because he kept on saying Hi to me.. He was already holding my hand and still saying HI. Hahahaha. He showed me the cupcakes made by my cousin Gia– with a diamond ring in the middle of a guy kneeling and a girl standing up— and the words Janina, will you marry me? 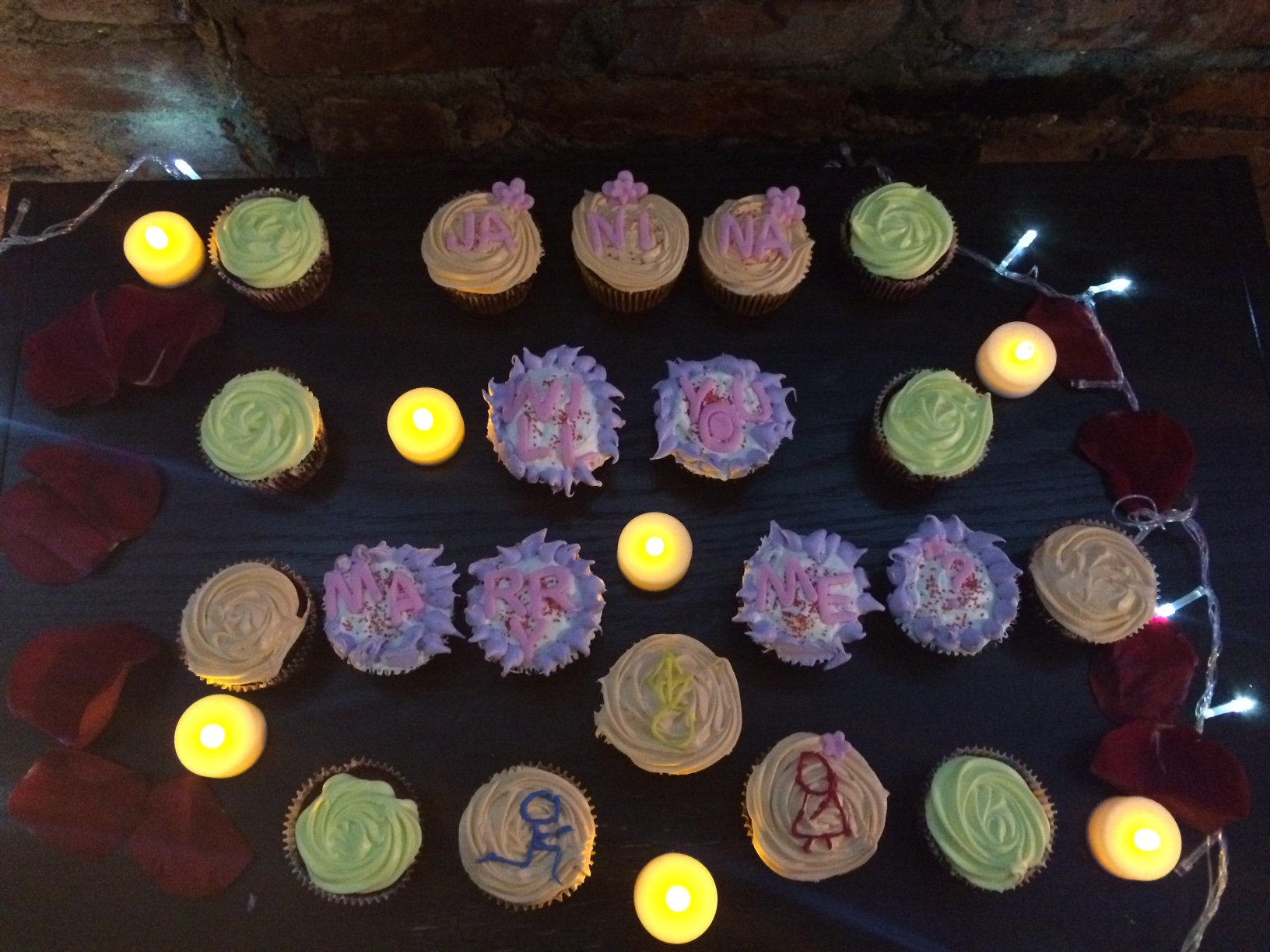 Cupcakes made by my cousin, Gia.

I think after that I was nodding… and then Warren made a speech. Ganun pala talaga, from blurry it became a bit blank. I just remembered bits and pieces of the words… like he has never been sure of anything and anyone in his life… how he doesn’t want to be apart anymore… and I don’t remember what, but he said something else that made us both cry. We were hugging for a long time and crying for a long time, and then he knelt down on one knee and asked me to marry him. Of course, I said yes. 🙂 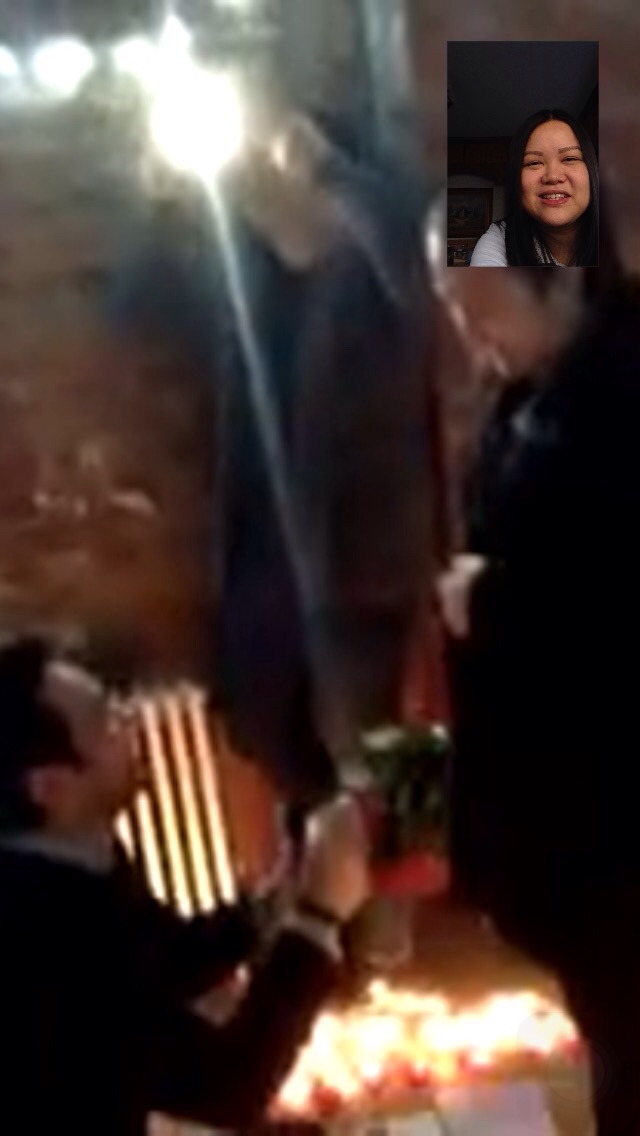 A screenshot from Tanya, one of my best friends, as she was also present during the proposal. 🙂 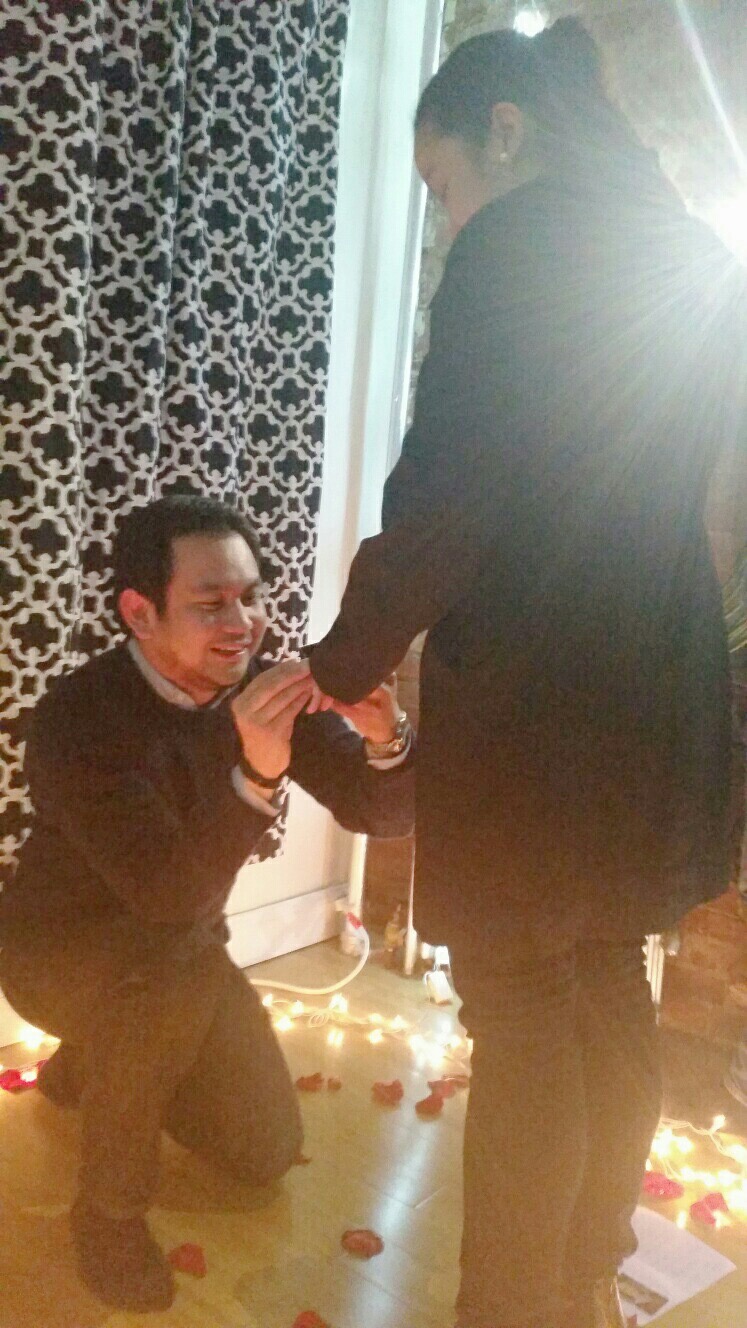 My Warren on one knee.

Popping of champagne glasses, group hugs and well wishes came soon after. I think it was only at this point when I snapped back to reality. Wow. That was just… surreal. 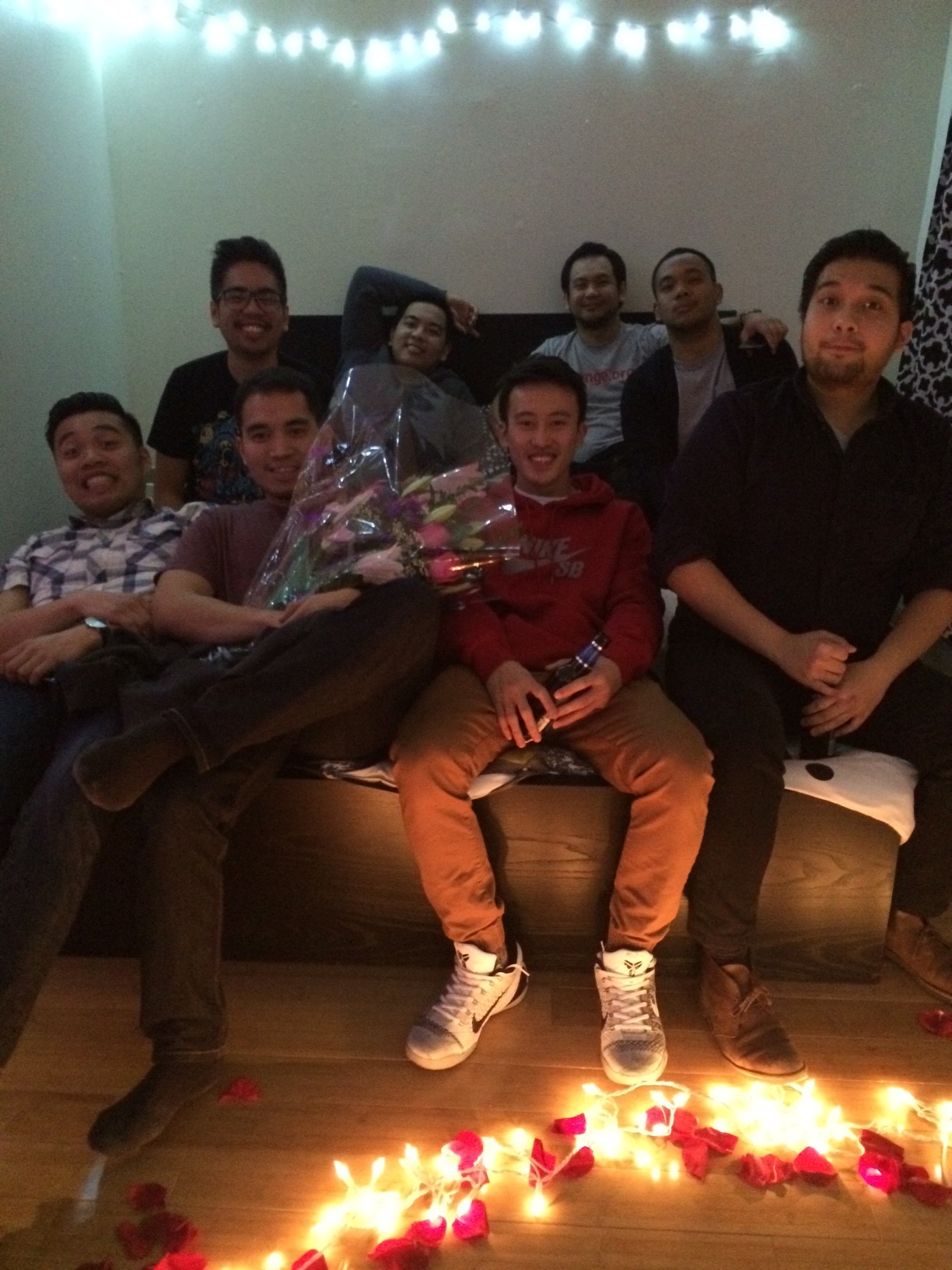 The friends who helped Warren set-up. 🙂 My cousins were there!!! Too bad nophoto of the girls.:( We forgot a lot of things that night. Haha.

Practice Round. Our friends playing around while they were waiting for me. 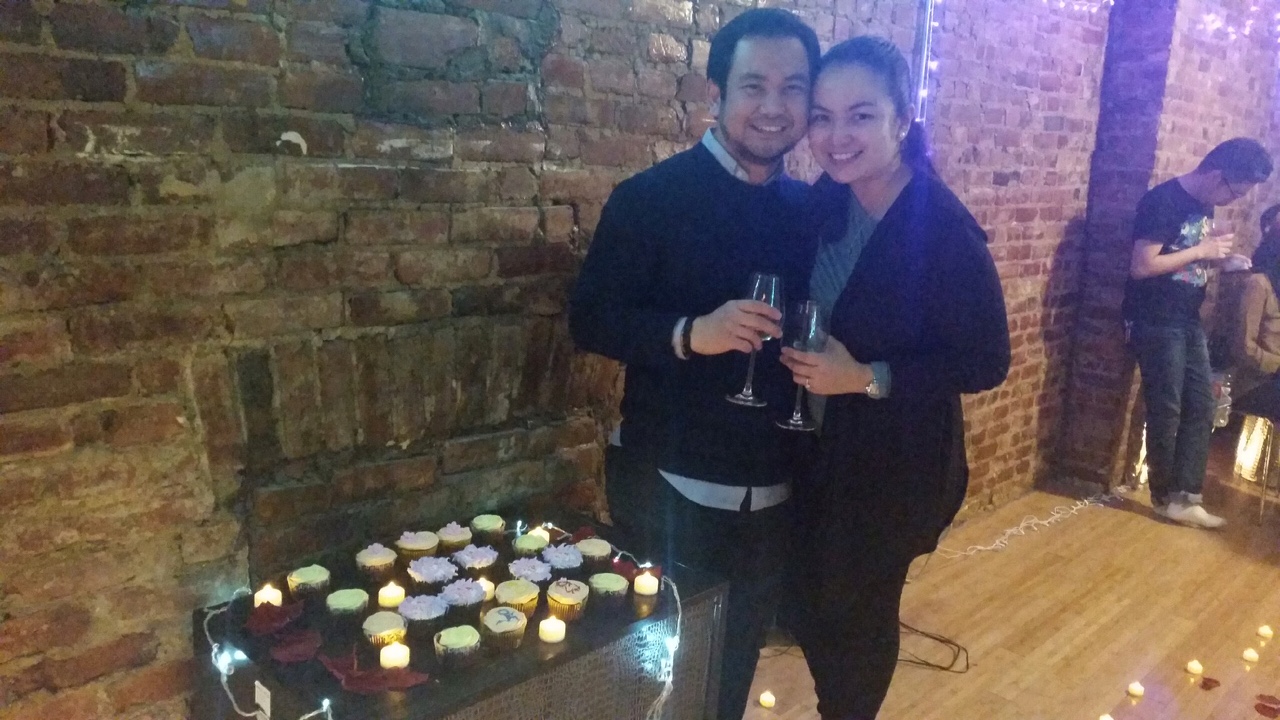 While nothing is perfect, I’m grateful to have realized 3 of the most beautiful things about life: God’s best, God’s impeccable timing, and how God answers prayers completely. I found all these in you. I cant think of any better reason to say YES.