On Loving Your Work

Are you currently employed? Are you close to hating your job because of your boss, that annoying colleague, or the pile of stress it brings you? Bro. Jan Silan and a special co-speaker had us re-think this.

This week opened a new talk series called “WOW: The Wonder of Working”, with its first talk, Believe. 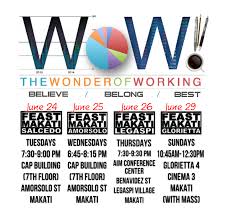 The special guest speaker, Ms. Jeanette Garcia of Children’s Hour, talked about the roller coaster ride in her career. The many ups and downs she had to go through before reaching the ultimate happiness she is experiencing now. Starting out and making it big in the corporate world, work was her escape. She wanted to escape from the problems back home, so she devoted all her time and energy on her work, which did her well for some time as she climbed up the corporate ladder. But then she got so burnt out that she opted to retire early, after which she lost everything she has worked so hard for, simply because she trusted the wrong people. Everything gone in a snap. After this downfall, work became her salvation. It became her means to survive. A few more turns and wiser decisions, she became part of Children’s Hour, where she now holds position and big responsibility. She has a team she so obviously loves, and is very happy despite the everyday difficulties she encounters. Suddenly, everything she has gone through finally made sense.

I think what makes Ms. Garcia’s sharing so touching is that it’s so real. It showed us that finding our passion and doing it full time is possible. It speaks of what each of us, working or studying, face every single day. The struggles and burnouts that we tackle, the misjudgements and mistakes that we make—it’s the same for us all. However, giving up should not be the immediate option, and this passage is why we believe in this:

Work willingly at whatever you do, as though you were working for the Lord rather than for people. Remember that the Lord will give you an inheritance as your reward, and that the Master you are serving is Christ. (Colossians 3:23-24)

They say you should bloom where you are planted. So no matter where you are in life, no matter how monstrous your boss seems, take heart that God placed you there for a reason. Believe that He is your true boss, and He blesses those who remain true to Him and His word.

By the way, everyone greatly felt the earthquake that night, but no one stood up and left. We all sat, most of us prayed, and waited for the earthquake to pass, probably because at the back of our minds, we know and we trust how God takes great care of His people.

Note: This article is written for the Blast from the Past column of Feast Makati (Amorsolo) Bulletin.