So what usually comes after the marriage proposal?

In the Philippines, it is the customary “Pamamanhikan”. This is the event when the guy/groom’s family comes to the home of the girl/bride’s family with the purpose of “asking the girl’s parents’ permission to wed the affianced pair.” A tradition that shows respect and honor for the girl’s parents before getting married.

I’ve known this concept for the longest time, and I know that coming from a “conservative” family, this is something that my parents want. I am grateful that prior to the proposal, Warren went to see my parents to express his intention to marry me, and after the proposal, he was also the one who initiated the pamamanhikan. I just didn’t realize how nerve-wrecking this can be! I mean, what do I do? What do we say? Do I need to prepare anything aside from food? How does it go???

For a good couple of weeks, I tried to research, asked around, and even visualized how the evening would be. I met Warren’s entire family, and they’re so warm, nice and welcoming, but somehow it didn’t lessen my nervousness. I’ve been in a pamamanhikan before for my cousin Abie, but it just felt like a natural family gathering to me. I guess I’ve always been fine to just be on the sidelines when it comes to weddings, that I don’t know how to act if it will already be about ME.

By the time our set date came around, I was already a wreck. But I prayed and took comfort in the fact that Warren came from a big and happy family, and most of his siblings are already married. I’m sure they already know how this thing goes.

True enough, contrary to all of my fears, when they came, it went as smoothly as possible. Warren’s mom, brother and his entire family, and his dad even flew from Florida for the occasion. A hearty meal (and great wine) was shared by our families, and towards the end, my dad expressed his gratitude for their visit. He stated his reasons for giving Warren his blessing, and even shared a few stories on how I was growing up. Warren’s dad also gave a nice speech and we learned more about their family. Since the wedding plans are still “raw”, we just gave them updates as to where we are already, and Warren’s mom and sister-in-law, ate Peachy, gave me suggestions in finding the stuff that I need. Warren and I expressed our thanks for the blessing and support we are getting from both our parents. Of course there were embarrassing moments (like when Papa proudly played the tapes from my segments in NBN and showed my old pictures–ughhhh), but I guess it’w better for them to know sooner rather than later, and come on, we all have those, right?

It seemed like a casual evening for two families, but given all the thoughts that ran in my head two weeks prior, this is what I saw: Before, I get so scared and emotional discussing the wedding, or marriage, because I don’t want to give my parents the impression that Warren is taking me away from them, or from my sister… the same way that I don’t want Warren’s mom to think that I am taking him away from them. Seeing our families together made me realize that it was never about that… marriage is it’s about uniting two families together. Warren is now another “kuya” to Joan, another son to my parents, and I will also be an addition to their equally wonderful family. 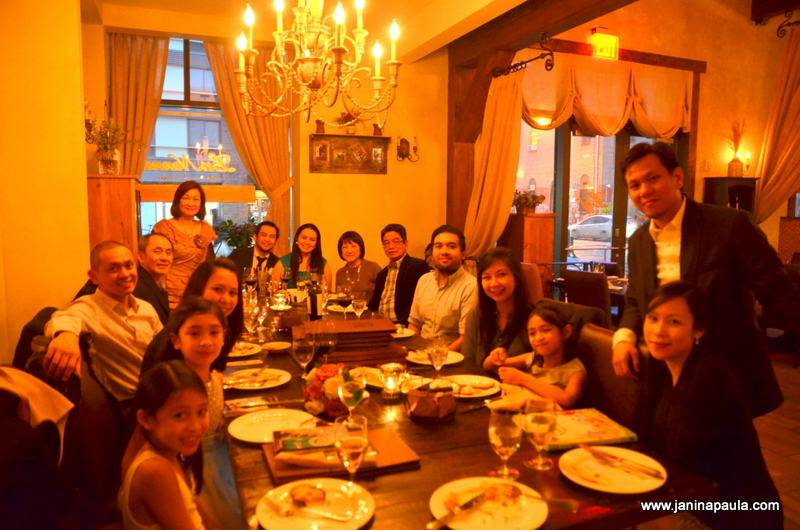 After that weekend, we had dinner again as a family, this time at a nice restaurant in Brooklyn. 🙂

Pamamanhikhan. As nerve-wrecking as it is to pronounce and go through… it is completely worth it. I would recommend this to all engaged ladies, even if you consider yourself a modern bride.